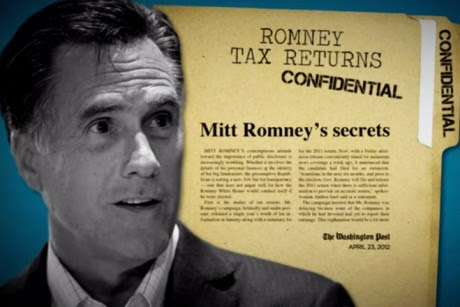 Poor widdle Mitt Romney just can’t seem to get anything right. Even when he does release a few tax returns, they reveal damning evidence about his tax avoidance schemes.

Naked Capitalism has a piece today that breaks down a revealing analysis by tax expert Lee Sheppard. Questions about Romney’s refusal to release most of his tax returns overshadow questions about the two years of returns he has released. Do they reveal shady dealings?

One question involved his $3 million Swiss bank account. It's already outrageous that Romney moved his money offshore to avoid taxes. But it turns out he may not have even reported it properly in his 2010 returns:


A Romney grantor trust had a $3 million Swiss bank account at UBS that the trustee closed in 2010. Romney's campaign said that the account was disclosed on foreign bank account reports and that U.S. tax was paid on the interest from it. Nondisclosure was common among rich people before the 2010 enactment of the Foreign Account Tax Compliance Act…Very few FBARs were filed before 2010.

Like many of his peers, Romney has not been audited in the past decade, according to his campaign.

Then there’s the issue of Romney’s massive IRA. As Sheppard writes,


Romney has a gigantic IRA, which may hold as much as $100 million in assets. We do not know what it contains. We can only speculate. Given the applicable contribution limits, it is hard to see how the IRA got so big, even if Bain deals were hugely profitable. Regardless of what is in the IRA, serious valuation and self-dealing questions are raised.

Sheppard also points to Romney’s Bain Capital private equity funds stowed away in tax havens like Bermuda and the Cayman Islands. Beyond Romney’s own assets in the Cayman Islands, Bain’s use of the tax shelter means investors can also evade taxes by lying about income generated by their investments. The tax expert explains:


Mainstream newspapers howl that Romney has assets in the Caymans, but the reality is worse. Bain Capital invests in the United States and other countries, including China, but it organizes its funds in the Caymans to keep investor lists secret while availing itself of British corporate law. Every other investment fund does the same thing.

The practical effect of Cayman registration is that if investors were of a mind to lie to their home governments about the existence of or income from their Bain investments, the secrecy of investor lists makes it easier to do so.


Before the Romneys can claim any passive loss deduction for Ann Romney’s share of Rafalca’s expenses, the LLC that owns the horse, Rob Rom Enterprises, has to be engaged in a trade or business. For that, it has to satisfy the hobby loss rule for horses, which has a rebuttable presumption of a business if there is a profit in two out of seven years (section 183(c)). Rob Rom has owned Rafalca for six years.

Moreover, the prize money in dressage competitions doesn’t come close to covering the roughly $120,000 per year for Rafalca’s upkeep and transportation from California to European competitions. So it is unlikely she would ever make a profit for her owners

None of this is terribly surprising given Romney’s oligarchic worldview. With his pick of the anti-worker and die-hard Ayn Rand cult follower premium wine enthusiast Paul Ryan as his running mate, Romney has reasserted his philosophy about how the rich ought to pay very little while workers should pay more.

But how can someone who so meticulously exploits every angle and loophole when it comes to paying taxes be trusted to lead a government that is supposed to enforce the law?