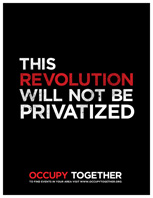 Who knows what will happen in the end, but the formation of 1,191 (and growing) "Occupy" groups and 101 active occupations suggests the movement has legs.

Even the New York Times is starting to get it. Saturday's editorial explaining the Occupy movement was a departure from the newspaper's snooty attitude toward non-Tea Party protests. The editorial concludes with a defense of the protesters,


It is not the job of the protesters to draft legislation. That’s the job of the nation’s leaders, and if they had been doing it all along there might not be a need for these marches and rallies. Because they have not, the public airing of grievances is a legitimate and important end in itself. It is also the first line of defense against a return to the Wall Street ways that plunged the nation into an economic crisis from which it has yet to emerge.

Economist Paul Krugman, in today's "Panic of the Plutocrats" op-ed, notices how those who serve the very wealthy are overreacting. They're denouncing the protesters as "a mob" (Eric Cantor) waging "anti-American" (Herman Cain) "class warfare" (Mitt Romney). Writes Krugman,


What’s going on here? The answer, surely, is that Wall Street’s Masters of the Universe realize, deep down, how morally indefensible their position is. They’re not John Galt; they’re not even Steve Jobs. They’re people who got rich by peddling complex financial schemes that, far from delivering clear benefits to the American people, helped push us into a crisis whose aftereffects continue to blight the lives of tens of millions of their fellow citizens. ﻿

Yet they have paid no price. Their institutions were bailed out by taxpayers, with few strings attached. They continue to benefit from explicit and implicit federal guarantees — basically, they’re still in a game of heads they win, tails taxpayers lose. And they benefit from tax loopholes that in many cases have people with multimillion-dollar incomes paying lower rates than middle-class families.

This special treatment can’t bear close scrutiny — and therefore, as they see it, there must be no close scrutiny. Anyone who points out the obvious, no matter how calmly and moderately, must be demonized and driven from the stage. In fact, the more reasonable and moderate a critic sounds, the more urgently he or she must be demonized, hence the frantic sliming of Elizabeth Warren.

So who’s really being un-American here? Not the protesters, who are simply trying to get their voices heard. No, the real extremists here are America’s oligarchs, who want to suppress any criticism of the sources of their wealth.

Posted by Teamster Power at 9:05 AM