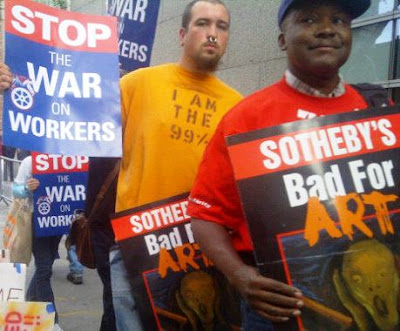 A long day on the picket line in front of Sotheby's reaped massive media attention for the plight of the locked-out Teamsters art handlers.
They got some help from actress Susan Sarandon. (We have an awesome photo but can only promise it later at this point.)

Reporters from international media to nationally syndicated radio programs to local newspapers such as the Daily News and the New York Post all came to OccupySothebys at 72nd and York. The burgeoning movement was to join forces with the Teamsters to protest what the 1 percent are doing to the 99 percent.

OWSers -- Wall Street Occupiers -- planned to join the Teamsters picket line at 1:30 p.m. New York City police arrived and put up more barricades. But logistical problems caused the OWsers to arrive two hours late. Spirits started to flag on the picket line with no word of their whereabouts.

Around 3:30 a dozen photographers appeared -- as did Susan Sarandon. Then the school bus finally arrived and the OWSers poured out of it. They picked up signs that said "Sotheby's is Bad for Art," and "Stop the War on Workers." Soon the sounds of "All Day, All Week, Occupy Wall Street," could be heard on Manhattan's Upper East Side.


I am a union member and I'm here to support other unions.

She donned a Teamster jacket and chatted graciously with art handlers as photographers snapped away.


It's been a rough few weeks for the city's billionaires, bankers and corporate board members.

As the Occupy Wall Street movement has gained steam, the city's well-heeled have become the target of protests aimed at embarrassing them in their neighborhoods or places of business. Drawing on tactics honed by labor unions, the protesters have visited restaurants, theaters and luxury apartment buildings to deliver pointed messages to some of the city's most notable power brokers.

Protesters have infiltrated an eatery run by Danny Meyer, who sits on the board of Sotheby's, the art auction house that has locked out workers for almost three months.

Posted by Teamster Power at 8:42 PM