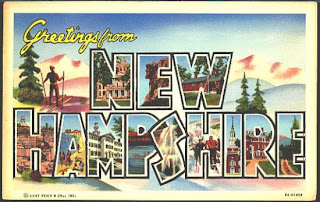 Woo-hoo! Island-paradise-dweller Bill O'Brien, speaker of the New Hampshire House, again failed in his crusade to destroy the middle class.

In a special session of the New Hampshire House yesterday, O'Brien failed to muster enough votes to override a veto of his right-to-work bill to destroy unions. The AFL-CIO reports,


The Republican Speaker of the New Hampshire House enlisted no fewer than five Republican presidential candidates today in an unsuccessful attempt to convince state representatives to override Gov. John Lynch’s veto of a “right to work” for less bill (H.B. 474).

...O’Brien turned the legislative session into a Republican presidential forum, inviting the candidates to spend more than three hours giving stump speeches to a captive audience of both Democrat and Republican lawmakers. More than 100 firefighters, teachers and other workers from every edge of the state turned out to protest the potential vote on “right to work” for less and to ask the candidates to keep state issues out of the debate around the primary.

...The speeches were staggered by 10-minute recesses and roll call votes during which O’Brien and his aides checked the attendance rolls to see if they had the numbers to override Gov. Lynch’s veto of “right to work.”

After the candidates left, with little hope of passing the bill, it was business as usual for O’Brien: voting to cut Medicaid for poor families and seniors, lecturing lawmakers on their failure to follow precedents (and failing to follow those precedents himself) and introducing a motion to call a third special session two days before the December holidays.

O’Brien has until the start of the new legislative session on Jan. 4 to override Lynch’s veto of H.B. 474.