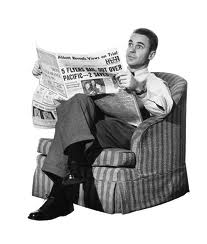 Ironically, one of those companies is Gannett. Ironic, because Gannett owns USA Today. Recently, notes Carr, USA Today ran an editorial that said,


The bonus system has gone beyond a means of rewarding talent and is now Wall Street’s primary business. Institutions take huge gambles because the short-term returns are a rationale for their rich payouts. But even when the consequences of their risky behavior come back to haunt them, they still pay huge bonuses.


If you were looking for bonus excess despite miserable operations, the best recent example I can think of is Gannett, which owns USA Today.

The week before the editorial ran, Craig A. Dubow resigned as Gannett’s chief executive. His short six-year tenure was, by most accounts, a disaster. Gannett’s stock price declined to about $10 a share from a high of $75 the day after he took over; the number of employees at Gannett plummeted to 32,000 from about 52,000, resulting in a remarkable diminution in journalistic boots on the ground at the 82 newspapers the company owns.

Never a standout in journalism performance, the company strip-mined its newspapers in search of earnings, leaving many communities with far less original, serious reporting.

Given that legacy, it was about time Mr. Dubow was shown the door, right? Not in the current world we live in. Not only did Mr. Dubow retire under his own power because of health reasons, he got a mash note from Marjorie Magner, a member of Gannett’s board, who said without irony that “Craig championed our consumers and their ever-changing needs for news and information.”

But the board gave him far more than undeserved plaudits. Mr. Dubow walked out the door with just under $37.1 million in retirement, health and disability benefits. That comes on top of a combined $16 million in salary and bonuses in the last two years.

And in case you thought they were paying up just to get rid of a certain way of doing business — slicing and dicing their way to quarterly profits — Mr. Dubow was replaced by Gracia C. Martore, the company’s president and chief operating officer. She was Mr. Dubow’s steady accomplice in working the cost side of the business, without finding much in the way of new revenue. She has already pocketed millions in bonuses and will now be in line for even more.


The Tribune Company, a chain of newspapers and television stations run into the ground by Sam Zell after he bought it in 2007, is paying out tens of millions of dollars in bonuses as part of a deal in which it would exit bankruptcy.

Over 4,000 people in the company lost their jobs, and the journalistic missions of formerly robust newspapers it operates — including The Los Angeles Times, The Chicago Tribune and The Baltimore Sun — have been curtailed. And even though Randy Michaels and some of his corporate fraternity brothers who operated the company into bankruptcy are gone, more than 600 managers who were there while the company cratered remain.

Not only do they have jobs while so many others were sent packing, but the remaining leadership will be eligible for a bonus pool from $26.4 million to $32.4 million under the current plan.

And we can heartily agree with Carr's conclusion about people "who are content to slide people out of the back of the truck until it runs out of gas:"

Posted by Teamster Power at 3:17 PM