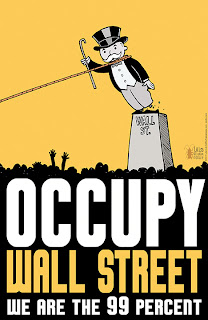 The corporate-owned media is doing its best to discredit the Occupy Wall Street movement -- obviously, because it's a threat to the corporate-owned media. Smear after smear has been reported by Rupert Murdoch's New York Post and Fox News, the Examiner papers and the Washington Times. They tried to paint the Occupiers as un-American hippies until military veterans and union members showed up. They tried to portray the movement as unfocused until it became clear that it's protesting corporate greed. Now they're trumpeting any kind of misbehavior among the thousands and thousands of people who've joined the extraordinary Occupy movement in the past few weeks.

So let's take a moment to review the criminal allegations against Wall Street. To give you an idea of the scope of the financial crime wave, one congressional investigator described it as "a million fraud cases a year." That's 2,739 fraud cases a day -- a sum that makes John Dillinger look like a piker.

First off, there's Raj Gupta, the former managing director of the international consulting firm McKinsey and a Goldman Sachs director. Gupta did a perp walk yesterday for allegedly cheating investors through insider trading.

Then of course there's Lloyd Blankfein, CEO of Goldman Sachs, aka the Great Vampire Squid that jams its blood funnel into anything that smells of money.  Blankfein almost certainly lied to Congress; but that's the least of his crimes. Blankfein and top Goldman executives David Viniar and Thomas Montag lied to their clients about the crappy real estate investments they sold them. The deal was a little more complicated than that, but here's how Matt Taibbi describes it:


Goldman, to get $1.2 billion in crap off its books, dumps a huge lot of deadly mortgages on its clients, lies about where that crap came from and claims it believes in the product even as it's betting $2 billion against it. When its victims try to run out of the burning house, Goldman stands in the doorway, blasts them all with gasoline before they can escape, and then has the balls to send a bill overcharging its victims for the pleasure of getting fried.

You won't be surprised that Goldman Sachs fleeced the Greek government as well.

Angelo Mozillo is another prime candidate for Club Fed. According to Forbes,


The perpetually suntanned founder of Countrywide Credit– Angelo Mozillo– made $521.5 million in compensation from 2000 until 2008. He also coined $140 million in gains from selling his Countrywide stock between November 2006 and October, 2007, at the very moment he was learning internally that his company was merchandising soon-to-collapse subprime mortgages– what he described as the most “toxic product” he’d ever seen. He called this expectation “a looming disaster” and the company’s “poison” according to internal emails. But, he told no-one on the outside, not his shareholders, not the regulators, not his board of directors– not even the politicians like Sen. Dodd for whom he had arranged sweetheart deals.

That's known as fraud and it's a crime.
We've discussed another Wall Street criminal, John Paulson, on this blog before. So we'll skip over to AIG's Joe Cassano, who told investors they wouldn't lose a dollar just months before they lost billions. Then on to Lehman Brothers Dick Fuld, who lied about the bank's finances along with his own obscene compensation of $484 million -- for driving his company into bankruptcy and causing a global financial crisis. These aren't just white lies. They're crimes.

It hardly seems fair. But that's the point.
Posted by Teamster Power at 3:24 PM