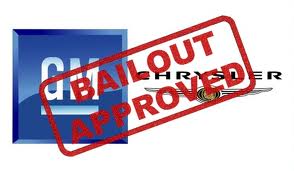 Not all bailouts are equal. Wall Street's bailout hasn't done much for anyone except for the bankers who are still taking home obscene amounts of money as a reward for looting the middle class.

The auto bailout is something quite different. Our friend Rob Scott at the Economic Policy Institute tells us how the bailout of GM and Chrysler is benefiting the U.S. We'll steal cross-post his blog:


In Dec. 2008, the U.S. auto industry stood on the brink of collapse. The Obama administration negotiated a restructuring plan for the industry that took General Motors and Chrysler through quick bankruptcies, helped get them back on their feet again, and provided bridge financing for auto parts makers and auto finance companies. This plan was widely criticized at the time but restructuring has paid big dividends for the nation, autoworkers and the domestic auto industry.

If the auto industry had been allowed to collapse, between 1.1 and 3.3 million jobs would have been lost between 2009 and 2011. After restructuring, more than 78,000 jobs have been added in U.S. motor vehicle production. All three U.S. auto companies returned to profitability in 2011 and they earned combined profits of nearly $6 billion in the first quarter of this year. Total sales and market share of the Big Three are all up sharply since 2009.

GM, Ford and Chrysler have bargained new labor agreements with the UAW, recently approved by workers at each company, which will ensure increased employment and investments in the United States by all three firms. The completion of these agreements and the strong improvement in the performance of U.S. automakers shows that the Obama administration made a wise decision to invest in the auto industry restructuring package. If the industry had been allowed to fail, costs to federal, state and local governments in the form of reduced tax payments and increased unemployment compensation would have totaled between $83 billion and $249 billion in 2009 alone.

The auto industry restructuring plan has yielded a huge return on taxpayer investment and put the industry and its workers on a solid path to recovery. I estimate the federal, state and local governments saved between $10 and $78 for every net dollar invested in auto industry restructuring—a very savvy investment at a time when failure to intervene would have been catastrophic for the domestic economy.

Posted by Teamster Power at 6:00 PM