Why does Congress only pass the BAD trade deals? 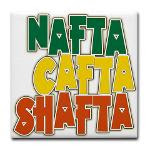 The Teamsters' friend Rob Scott over at the Economic Policy Institute wrote a blog post that we're just going to steal cross-post. It's about how Congress just passed a trade bill that kills jobs, but won't pass one that creates jobs:


Last week, Congress considered two important pieces of legislation that will affect imports and exports; one would provide a substantial boost to the U.S. economy in the near term while the other will be irrelevant at best. The first was S 1619, The Currency Exchange Rate Oversight and Reform Act of 2011. I have estimated that ending currency manipulation with China and other Asian countries could create up to 2.25 million jobs over the next 18 to 24 months, boosting GDP by up to $285.7 billion and reducing the federal budget deficit by up to $857 billion over the next 10 years.

Contrast the fate of currency legislation with the package of free trade agreements negotiated by the Bush administration with South Korea, Colombia and Panama. These deals were rushed through both chambers of Congress last week just in time for the visit of South Korea’s president Lee Myung-bak. The Korea and Colombia FTAs were opposed by more than two-thirds of House Democrats, and 64 percent opposed the Panama FTA. Yet, both were approved by the House and Senate and will be signed into law by President Obama later this week.

At best, the administration claims that these deals will support a few tens or hundreds of thousands of jobs that could be created over the next decade (I have estimated that when the effects of growing imports are included, we are likely to lose over 200,000 jobs over the next seven years due to the Korea and Colombia FTAs alone). But the United States has a jobs crisis now. A decade from now, if employment finally recovers, these deals could simply end up moving jobs from one industry to another. FTAs are no answer to the jobs crisis, even in the best case.
Given the jobs crisis, why can’t we pass currency legislation that enjoys broad, bipartisan support? Why are controversial trade deals that will have, at best, a minimal impact on unemployment being rushed through Congress with a full-court press from the White House? The answer is simple. Big business opposes restrictions on China trade because they earn enormous profits on cheap and subsidized imports from China, and because low real wages in China keep a lid on wages of their U.S. workers. And big business favors FTAs, because they make outsourcing easier. So it turns out that the Occupy Wall Street group has it right. When it comes to trade, it’s not about ideology, or politics, it’s about the money.

Posted by Teamster Power at 5:56 PM