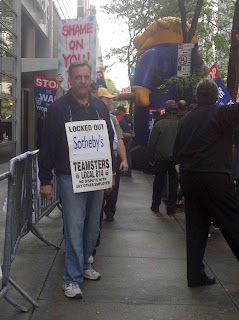 Outside Sotheby's on New York's Upper East Side, police are setting up barricades and traffic is stopped. Teamsters gathered this morning outside the auction house and are being joined by Occupy Wall Streeters.


at #occupysothebys press here, rat has new signs taped on. 'What do we want?' 'contract' "when do we want it? 'now' #teamsters #ows #1u