Cameras, but not guns, banned in WI Statehouse 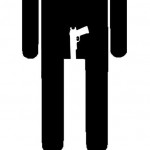 Though firearms are allowed in the elegant marble halls of the Capitol, cameras are not.

A reporter was actually arrested last week when he tried to videotape protesters who were arrested for sitting in the gallery with signs pinned to their shirts. Yup, signs aren't allowed either, if they're pinned to shirts. They're allowed, though, if they're sewn to shirts.

What will those apocalyptic lunatics think of next?
Posted by Teamster Power at 11:53 AM