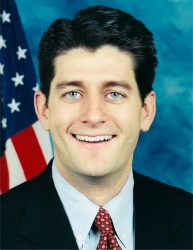 Here's what the Wisconsin congressman had to say:


We're coming close to a tipping point in America where we might have a net majority of takers versus makers in society and that could become very dangerous if it sets in as a permanent condition. Because what we will end up doing is we will convert our safety net system ... into a hammock that ends up lulling people into lives of dependency and complacency which drains them of their incentive and the will to make the most of their lives.

Pierce points out that we don't "make" much in this country any more:


...the reason that we don't make much in this country any more is because, 30 years ago, we put our brains in cold storage and started taking crackpot conservative economics seriously. The difference between a maker and a taker in the economy is whether or not the widget plant moved to China, or whether or not the company got broken up and its pension plan pillaged because some deregulated Wall Street ferret created a new way to steal other people's money. That's what we "make" now: complicated new financial instruments with which the "makers" can lift our wallets.

Tell us, congressman, when you were skating for a couple of years on your Social Security survivor's benefits, and when your family stayed on the government dole for longer that that, "taking" from, among other people, my parents and me, how did you manage not to be "lulled" into a life of "complacency" and "dependency"? How were you not "drained" of your "incentive"? How was your "will to make the most of your life" not drained, as well. What's the magic number? Two years on the dole? Three? Five? Let us know so we can stop pestering you and find our bootstraps....

Read the whole thing here.
Posted by Teamster Power at 9:31 AM