﻿
﻿Workers on a third continent are now protesting Sotheby' abuse of its Teamster art handlers as socialites affiliated with the auction house are villified and another Occupy march gears up.

Our TWU brothers and sisters just staged a rally outside of the Sotheby's auction house in Australia. Add that to the direct actions in London and New York -- along with the international press attention -- and you get one hell of a damaged international reputation for Sotheby's.

Columbia students are now circulating a petition (sign it here) calling on Sotheby's to end the lockout. The petition shames Columbia's president emeritus, Michael Sovern, who is chairman of Sotheby's board of directors.


Sotheby's and Diana Taylor are part of the top 1 percent in this country. As chair of the Women's Foundation, Diana Taylor should support their mission of working for economic security and justice for women. So why, as a board member of Sotheby's Auction House, does she condone Sotheby's throwing hardworking New Yorkers out on the street without paychecks? Our families rely on these good jobs and benefits.

The corporate-owned media is doing its best to discredit the Occupy movement as a bunch of dirty hippies, but it's backfiring in large part because of Sotheby's. Bloomberg News, the mayor's company, reports that the Teamsters' own Dave Martinez symbolizes the 99 percent who are crushed as the 1 percent get richer:


Far from battling unions, Occupy Wall Street has their active support. David Martinez, a shop steward for Teamsters Local 814, has been shuttling between Zuccotti Park and Sotheby’s, the Upper East Side auction house that’s in a labor dispute with its art handlers.

...Martinez, the son of a fireman, will turn 50 in November. He graduated from Pomona College, an elite school in Southern California, got a master’s in religious studies from Yale, and started work on a PhD. He dreamed of being an artist while teaching religious studies; the closest he came was handling art for Sotheby’s, and now even that job is on the ropes. 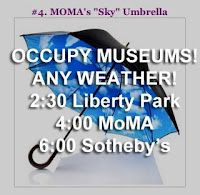 We are unaware of anyone who has come to Sotheby's defense even as the Teamsters' art handlers continue gather support -- from workers around the world, from the news media, from the art world, from students, from Occupy Wall Street. Tonight, Occupy Museums -- an offshoot of Occupy Wall Street -- will march on Sotheby's in solidarity with the Teamsters.

Even Wall Street may be turning on Sotheby's. Yesterday, an investment analyst downgraded Sotheby's rating from "outperform" to "neutral."

"Idiotic" doesn't begin to describe it.
Posted by Teamster Power at 9:56 AM