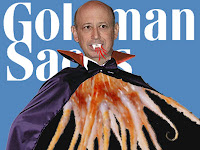 More charming behavior from Goldman Sachs, aka the Great Vampire Squid wrapped around the face of humanity, relentlessly jamming its blood funnel into anything that smells like money.

The online publication Salon exposes the way giant multinational corporations suck the lifeblood from workers by calling them "independent contractors." It's a scam with which the labor movement is familiar. Reports Andrew Leonard,


...on an economy-wide scale, the calculated misclassification of employees as independent contractors is a nightmare for workers. It removes the normal protections employers are legally required to give their employees without offering any real freedom in exchange. The practice is also a disaster for governments struggling to balance their budgets, depriving both federal and state governments of billions of dollars in tax revenue.

On the surface, the growing incidence of independent contractor misclassification and other efforts by employers to shortchange their employees — paying less than the minimum wage, skimping on workers’ comp, refusing to pay overtime — would appear to support the conservative explanation of why the shadow economy is growing: Companies are attempting to escape the burdens of “high” taxes and “excessive” regulation. In other words, the bigger and more intrusive the government, the bigger the shadow economy.

But a closer look at the situation of port truck drivers like Leonardo Mejia reveals that the truth is far more complicated, and far less a consequence of the size of government, than the stock conservative analysis suggests. In the trucking industry, deregulation has played at least as large a role as labor law regulations in prompting the remorseless squeezing of workers. No less important are the cost pressures induced by globalization — truckers like Mejia are tiny, vulnerable links in vast global supply and production chains dominated by huge multinational corporations. In a competitive landscape where everyone is constantly striving to reduce costs, workers like Mejia end up crushed.

Here's where the Great Vampire Squid comes in: Mejia, a veteran truck driver at the Port of Long Beach, is an "independent contractor" for Shippers Transport Express, a subsidiary of Seattle-based global marine terminal operator SSA Marine and its U.S. trucking outfit -- which are jointly owned by Goldman Sachs.


It’s a good deal for Shippers — Mejia has to cover the costs of his own health insurance, maintenance on the truck, and diesel fuel — but not so great for Mejia. Although he works exclusively for Shippers Transport Express, according to his employer he’s an independent contractor, with no safety net to protect him from misfortune except for whatever scraps he can carve out from his barely subsistence level wages.

He misses his old truck.

“Every day is getting worse,” says Mejia. “Before when we used to have our own trucks, every time we have a problem with a dispatcher or the owner of a company we just take the name of the company off our truck and we go to somewhere else. Right now we don’t have nothing to take with us. Except maybe my clipboard.”

Any questions about why Wall Street is being occupied?
Posted by Teamster Power at 9:18 AM