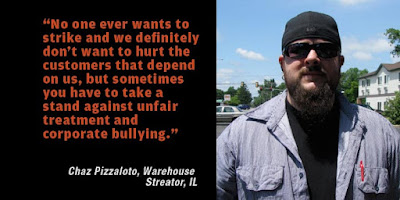 Chaz is right. No one wants to strike, but US Foods in Streator, Ill., forced our Teamster brothers to take action yesterday. Maintenance workers went on strike, and drivers and warehouse workers refused to cross the strike line. Hundreds of Teamsters at US Foods facilities are expected to show solidarity, too.

Things have been nasty at US Foods ever since it was bought by fast-buck artists KKR & Co. and Clayton, Dubilier & Rice four years ago. They looted the company of as much cash as they could even as they waged a vicious war on their own workers. In Boston, US Foods took $900,000 in government tax subsidies, then had the stones to close a massive new union facility. They cut 114 good union jobs in Boston and shipped the work to out-of-state facilities.

@longhairedfool from Boston tweets of his bitter experience with the company:


Worked there 28 yrs since it was MonarchFood, then JP foodservice used to be a great place to work they cared about us then

Support you from Boston South!!!bastards locked us out and closed. STAY STRONG!!

Under the corporate predators KKR and CD&R, union and non-union workers were harassed and intimidated throughout the country. In Streator, management refused to bargain in good faith -- and then retaliated against the bargaining committee. They tried to take away workers’ ability to honor picket lines if a sister facility struck. They tried to freeze the pay of drivers and warehouse workers. They demanded unprecedented increases in health care costs. The company's unfair labor practices finally pushed the maintenance workers from Local 722 into a strike.

It goes on and on. In Reno, Nev., U.S. Foods refused to bargain with Teamsters Local 533. They tried to force workers to accept a substandard agreement that would have undercut the standard set by Sysco. They forced workers to accept potentially unlimited health care cost increases and drastically expanded management’s right to change working conditions.

In Arizona, Region 28 of the National Labor Relations Board issued a complaint of almost 200 unfair labor practices. The NLRB said the conduct of U.S. Foods prior to a union election in Arizona was “so serious and substantial that the possibility of erasing the effects…by the use of traditional remedies is slight.” In May 2009, U.S. Foods agreed to recognize the union, hire back 14 illegally fired workers, and provide more than $163,000 to 22 workers who had faced discrimination.

They've tried the same thing against workers trying to join a union in Ohio, North Dakota, Pennsylvania and California.

In Alabama, the company interfered with workers' rights to join the Teamsters -- including firing a non-union worker for supporting a Teamsters organizing drive, holding anti-union meetings, printing ugly anti-union lies and making implied threats about jobs and pay.

In Florida, the company hired Ogletree Deakins, a pricey union-busting law firm, to illegally interfere with workers' rights to join a union.

Read more at the new US Foods website, US FoodsWorkers.org.
Posted by Teamster Power at 2:57 PM