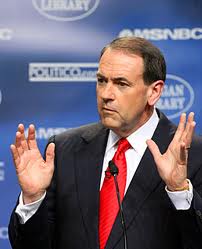 Former Arkansas Gov. Mike Huckabee came to Ohio to stump for the hated SB5 bill, which would destroy government unions. A corporate front group, probably bankrolled by the Benedict Arnold Koch brothers, has been cheating and lying to persuade Ohioans to support the bill on the November 8 ballot. Huckabee urged them to cheat and lie some more.

Here's what Huckabee told people at a Warren County breakfast to raise money for SB5:


"Make a list. Call them and ask them, 'Are you going to vote for Issue 2 and are you going to vote for it?'" Huckabee advised, according to an audio recording provided by a foe of the initiative. "If they say no, well, you just make sure that they don't go vote. Let the air out of their tires on election day. Tell them the election has been moved to a different date. That's up to you how you creatively get the job done."

Many a truth is spoken in jest. Remember, where Huckabee was speaking: Ohio, where former Secretary of State Ken Blackwell managed to steal the 2004 election for George W. Bush.
Posted by Teamster Power at 7:23 AM