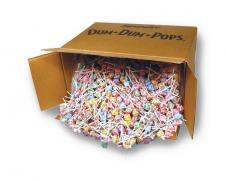 Halloween is next weekend, and if you haven’t already bought loads of candy, now is your chance to support your Teamster brothers and sisters with Teamster-made treats.

Dum Dum Pops have always been a Halloween staple, but you can now proudly support them knowing they are made by Local 20 workers in Bryan, Ohio. At Spangler, the company that makes Dum Dum Pops, Teamsters also make Circus Peanuts and Saf-T-Pops.

Local 26 workers in Bloomington, Illinois who work for Nestle make Laffy Taffy, another great choice when filling those bags with candy.

Remember Ring Pops? They’re still around, and the flavors sound better than ever. Twisted Blue Raspberry Watermelon? Strawberry Ice Cream? And it’s just that much sweeter knowing that Local 229 Teamsters in Scranton, Pennsylvania make them.

And Pez! What’s better than Pez? Not much. The candy is made by Local 443 Teamsters in Connecticut.

Check out this site for other union-made candy.
Posted by Teamster Power at 1:42 PM