Billionaire looter tells OWS to get off his lawn 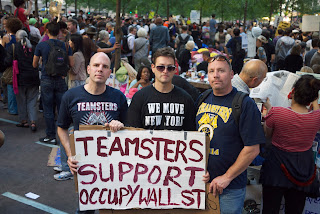 John Paulson, one of the billionaires on yesterday's Walking Tour in New York, says Occupy Wall Street will hurt business.

He put out this statement that said,


Instead of vilifying our most successful businesses, we should be supporting them and encouraging them to remain in New York City and continue to grow.

John Paulson is one of the last people Wall Street wants attacking the protesters. He is one of the single most villified people in financial circles, possibly the world. Many people think he should be in jail.

In a nutshell, Paulson convinced Goldman Sachs to bundle crap mortgages, convince the ratings agencies to say they're good investments and then sell the bundle of crap to pension funds and other investors. Then Paulson, who knew the bundle was crap, bet against it. He made $15 billion. (We hesitate to use the word "earned." And he didn't create a whole lot of jobs, either.)
Seeking Alpha recounts the allegations against Paulson.


...the SEC alleges that John Paulson, manager of a large hedge fund company, paid $15 million to get GS to structure a synthetic derivative which would allow him to short billions of dollars worth of residential mortgage backed securities (RMBS). He allegedly provided a list of securities that he wanted the CDO to include.

According to the SEC, these included bonds secured by mortgages that included borrowers with a

Using credit information, in this manner, may have been illegal and subject to criminal penalties.

Problem is, as the Rolling Stone's Matt Taibbi points out, Wall Street criminals are difficult to identify and their crimes hard to explain:


...it's extremely difficult to explain the crimes of the modern financial elite in a simple visual. The essence of this particular sort of oligarchic power is its complexity and day-to-day invisibility: Its worst crimes, from bribery and insider trading and market manipulation, to backroom dominance of government and the usurping of the regulatory structure from within, simply can't be seen by the public or put on TV. There just isn't going to be an iconic "Running Girl" photo with Goldman Sachs, Citigroup or Bank of America – just 62 million Americans with zero or negative net worth, scratching their heads and wondering where the hell all their money went and why their votes seem to count less and less each and every year.

Perhaps if just one big Wall Street criminal went to jail, the crimes might stop. As one congressional staffer memorably said about Goldman Sachs CEO,


You put Lloyd Blankfein in pound-me-in-the-ass prison for one six-month term, and all this bullshit would stop, all over Wall Street. That's all it would take. Just once.