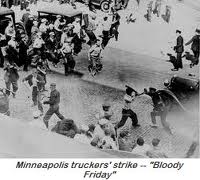 Thanks go out to sister Diane Ersbo with Local 638 in who sent us this great piece of Teamster history. Dave Smith, a 37-year UPS Teamster and Local 638 member, wrote this poem about the 1934 Minneapolis Teamster strike. It has particular relevance today, with OWS protests taking place worldwide:

Minneapolis truck strike of 1934
The days were bleak in ’29
The stock market plunged in descent
Banks collapsed and businesses closed
Unemployment was at 25 percent.

Employers then saw their chance
To bust unions in the disarray
To slash wages and benefits for workers,
And drive down what they will pay.

Then in May of 1934
The Teamsters turned the tide
Minneapolis Local 574
Had the transportation workers allied.

A strike was called that May
35,000 tradesmen in all
And all the businesses relented
But their commitments they would forestall.

The Citizens Alliance opposed the terms,
Anti-union to its core,
Declared the Teamsters communist
And vowed to go to war.

The strike resumed July 17
With sticks and bats in hand
The strikers held their ground,
But the Alliance hatched their plan.

Unarmed strikers were dispatched in autos
Were lured by a scab truck that day,
100 policemen fired shotguns
The incident became “Bloody Friday”.

Sixty-seven pickets were injured,
Some were even shot in the back,
John Belor and Henry Ness were ambushed
And died in this sanctioned attack.

Governor Olson declared martial law
And called out the National Guard
Who protected the scab trucks with permits,
And the declared picketing barred.

The Guard surrounds union headquarters
Arrested 100 men in the raid
But the union called a mass rally
40,000 marched on the stockade.

The union headquarters was yielded
The leaders released to the street
The strike ended August 21
The Citizens Alliance was beat.

Elections were held in the workplaces
And the union began a new age
Where workers could stand together
And demand a fair working wage.

What once was a scab’s paradise
That set on Minnesota soil
Became a city of hope
For all workers who toil.

The message is marked in the lyrics
Of a 1934 protest song:
“Solidarity forever,
The union makes us strong.”
Posted by Teamster Power at 4:20 PM