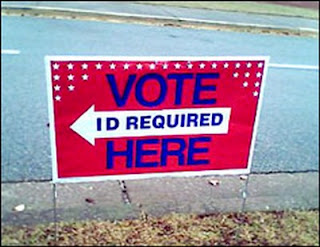 State lawmakers are passing "voter ID" laws right and left. They sound good, right? What's wrong with making sure the people who vote are who they say they are?

Here's what's wrong with it: These ID laws, pushed by the corporate front group ALEC, aim to prevent seniors, students and poor people from voting. They're the reason why corporate-backed politicians like John Kasich, Rick Snyder and Scott Walker aren't worried about their low approval ratings. All they have to do is keep the people they're attacking from casting a vote when they're up for re-election.


Republicans have long tried to drive Democratic voters away from the polls. "I don't want everybody to vote," the influential conservative activist Paul Weyrich told a gathering of evangelical leaders in 1980. "As a matter of fact, our leverage in the elections quite candidly goes up as the voting populace goes down." But since the 2010 election, thanks to a conservative advocacy group founded by Weyrich, the GOP's effort to disrupt voting rights has been more widespread and effective than ever. In a systematic campaign orchestrated by the American Legislative Exchange Council (ALEC) – and funded in part by David and Charles Koch, the billionaire brothers who bankrolled the Tea Party – 38 states introduced legislation this year designed to impede voters at every step of the electoral process.

Blue Cheddar reports on what it's like to try to get a voter ID at the Wisconsin DMV. The Wisconsin law passed this year as a way to prevent pro-worker voters -- like all the students in Madison -- from casting a vote. Remember how they tried to close the DMVs in Democratic districts and open them in Republican districts?) The Wisconsin blogger reprinted an account by Ruth Meacham, who tried to get a voter ID for her 72-year-old mother. Writes Blue Cheddar,


...when Rebecca and her 72-year-old mother began their quest for a new Wisconsin I.D., the two encountered long waits, they had to make multiple trips, and a DMV staffer even threatened to sic the police on them...


Show me the poor people boarding buses and trains, or walking for miles, so they can cast a vote in the wrong precinct using somebody else's name.

Show me throngs of citizens spending entire days traveling from precinct to precinct to cast their votes over and over in the same election.

Until Republicans can produce these felons, any attempt to restrict voters' rights by conjuring mythical malefactors is partisanship of the most dangerous kind.

digby's angry rant about the right-wing attempt to prevent Democrats from voting is spot on:


...it's picked up speed in the last 12 years. They impeached a Democratic president and stole an election in a two year time span. They fired US Attorneys for failing to rig elections and dismantled the voting rights section of the DOJ. They've packed the courts with anti-democratic judges and filed cases before them to create a sense of systematic voter fraud that doesn't actually exist. And last November they made their move into state houses all over the country and wasted no time in creating laws to disenfranchise as many liberal voters as possible.

Democrats had better hope that the coming elections aren't close. If they are, there's just no way they can win with these laws that are coming on line. And that's the plan...