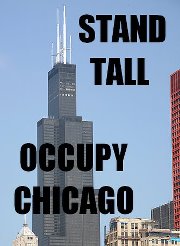 The Wall Street occupiers are still holding down Fuccotti Park even as protesters begin to plan and carry out actions around the country.

In Chicago, protesters have been camped out in front of the Federal Reserve Bank since Friday. In Wisconsin, protesters rallied outside of the Metropolitan Milwaukee Association of Commerce today as Koch whore Gov. Scott Walker spoke inside. Occupy Portland today boasted 3,000 members as it plans a march next month.

According to gothamist.com, Sarandon said,


"It warms my heart to see all of you here," Moore told the few hundred people gathered at Zuccotti Park as part of the "Occupy Wall Street" protest. He told them they each represented thousands of other Americans, and to not lose heart, that "our power is derived from the people."

Moore posted a message on his Twitter account while he was still with the protesters stating: "This is just the beginning. Honored to be part of this." 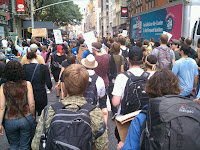 He railed against Wall Street and the richest of the rich, saying "they have tried to take our democracy and turn it into a 'kleptocracy."'

Marches are planned around the country for early October. The OB Rag reports there'll be a march in San Diego on Oct. 7, while RT.com reports


...dozens of more locales across America are expected to be swarmed upon by citizens sick and tired of corrupt corporations and financial institutions run amuck by mismanagement and greed.

Within the next few days, occupation-style protests like the one happening in Liberty Plaza Park, Manhattan are expected to occur in Washington DC, Lexington, Kentucky and San Francisco

And this from Occupy Milwaukee's page:


Occupation set for Oct 1! Please come to GA at 7pm, Pershing Square, to get involved! We need you #LA! #takewallstreet http://pic.twitter.com/zDEvgQel

An action is planned for Oct. 8 in Indianapolis. Occupy Atlanta holds a planning meeting tomorrow night. Occupy New Orleans is getting organized, as are dozens more groups across the country. UPDATE: Here's a twitter guide for each city here.

If anyone has any questions about what's fueling the movement, here's one hint:


@jcstarzyk: In July 2011, unemployment for 16-24 year olds hit 51.1% the first time over half America's youth was unemployed. #occupychicago #occupychi