This is what we union thugs do: Care for the sick and the grieving 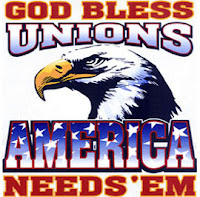 Hat Tip to Omaha Steve at the Democratic Underground for sharing this letter from the Omaha World:

I keep reading how people seem to think of labor unions as a bad thing. After reading David Getzschman's Sept. 9 letter, I decided I need to inform people about the good side of labor unions. My late husband was a member of the Teamsters Union, Local 554.

In 1999, he died of melanoma cancer. During his illness, the health insurance we had through the union paid for all of his medications. One course of medication cost $3,000 a month — not something we would be able to afford by any means.

After his death, the Teamsters were still there for me. They provided my health insurance at no cost, a small pension and life insurance, which helped me get my life back on track.

I'd be the first to tell the world how many things the union did for me. I wonder how many companies would do that for the regular employee. Our local union helps people in many ways every day and is not the bad big wolf, as some would have us think.