Why you're poorer than your parents 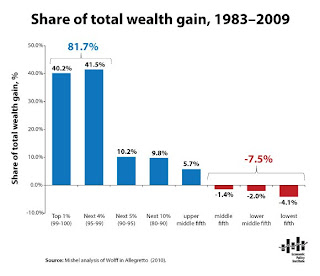 Apologies for the fuzzy chart, but those blue bars show how much wealth the richest 1 percent and 4 percent of Americans (the two tallest bars) gained over the past two-and-a-half decades. You know what the red bars are.

Our friends at the Economic Policy Institute came up with the chart. Writes Larry Mishel,


...wealth is now lower for the typical household than it was a generation ago in 1983, while the wealth at the upper end expanded a great deal.

Look to the Teamsters' art handlers' dispute with Sotheby's to understand why this is happening. Counterpunch explains in a post entitled, "The Sotheby's Economy":


Sotheby’s art handlers don’t get rich, but they make a living. And that is precisely what these bosses have a problem; no longer does their greed need an economic justification. Instead they demand lower wages and fewer benefits for their workers not because these costs are too burdensome, but simply because they are ideologically motivated to widen the wealth gap at all costs, and know that there are plenty of jobless Americans who are willing to work for peanuts.

The labor conflict at Sotheby’s is a demonstration of how far the American economy has fallen from the ideal standard of American industry in which profitable companies can only sustain themselves if their workers can afford to be consumers in the marketplace. Because of employers like Sotheby’s, the phrase “Be lucky you have a job,” will soon be “Be lucky to be a serf.”