More and more people are declaring their support for the movement, including U.S. Sen. Bernie Sanders, Kansas state Sen. Marci Francisco and San Francisco city Supervisor John Avalos, who rallied demonstrators before they marched to a JP Morgan Chase bank branch, where six were arrested.

Sanders was interviewed by Keith Olberman (hat tip to PoliticusUSA) and said: 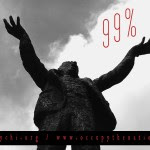 What I appreciate about what’s going on in New York right now is that there is a spotlight being focused on Wall Street. We desperately need that. If we are going to get out of this recession, if we’re going to create the millions of jobs we desperately need, we need real Wall Street reform. A lot of people don’t know this, you have six financial institutions the largest six banks in the country who control sixty percent of the assets in the United States of America. After we bailed them out because they were too big to fail, three of the four largest financial institutions actually became bigger.

Francisco went to Fuccotti Square and spoke to the occupiers, saying,


I will take back what I've seen to Kansas.

Slate offers a pretty thorough list of people and organizations that are planning a march Wednesday on Wall Street:

Additionally, Working Families Party, Moveon.org, Make the Road New York, the Coalition for the Homeless, the Alliance for Quality Education, Community Voices Heard, United New York and Strong Economy For All are involved in the organization of the march.

There are now "Occupy" movements in 81 U.S. cities. Here's an announcement from a newcomer, Occupy Asheville: 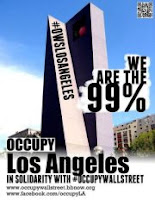 "Occupy Asheville" will "officially" kick off this Saturday, October 1, 2011, at 11 am in front of Jubilee Church on Wall St in Asheville, NC, with a memorial service for Troy Davis, in conjunction with his funeral in Savannah, Georgia occurring at the same time, and thereafter from 1pm onward, we will launch our local “occupation” to stand in solidarity with protests in New York, and across the nation and world. At 2pm Occupy Asheville will convene a "General Assembly" in Pritchard Park.

Occupy Maine will rally at Monument Square in Portland tomorrow at noon. Occupy Boston will start an "ongoing protest" in Dewey Square tonight at 6. Occupy Chicago camped out in front of the Fed for the seventh straight night. Occupy Los Angeles will march to City Hall and begin the occupation at noon.

You get the idea.
Posted by Teamster Power at 12:39 PM