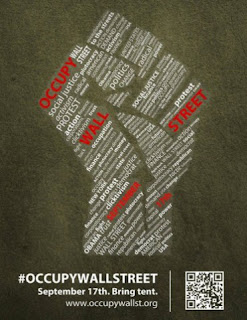 Protesters -- we estimate hundreds -- are dug in at Zuccotti Park on Wall Street, with sleeping bags and pizza deliveries paid for by sympathizers. At least 100 spent the last two nights encamped there. Police placed barricades in the protest zone around the stock exchange, forcing people to show ID to enter.

The group has said it plans to turn Lower Manhattan into an "American Tahrir Square."
At least seven people have been arrested since the "Occupy Wall Street" protest began on Saturday, when about 1,000 gathered by meeting first in a park on Broadway to protest the U.S. capitalist system for what they termed greed and corruption.

The UK Guardian had a great piece about the occupation, "The call to occupy Wall Street resonates around the world:"


On Saturday 17 September, many of us watched in awe as 5,000 Americans descended on to the financial district of lower Manhattan, waved signs, unfurled banners, beat drums, chanted slogans and proceeded to walk towards the "financial Gomorrah" of the nation. They vowed to "occupy Wall Street" and to "bring justice to the bankers", but the New York police thwarted their efforts temporarily, locking down the symbolic street with barricades and checkpoints.

Undeterred, protesters walked laps around the area before holding a people's assembly and setting up a semi-permanent protest encampment in a park on Liberty Street, a stone's throw from Wall Street and a block from the Federal Reserve Bank of New York.

Three hundred spent the night, several hundred reinforcements arrived the next day and as we write this article, the encampment is rolling out sleeping bags once again. When they tweeted to the world that they were hungry, a nearby pizzeria received $2,800 in orders for delivery in a single hour. Emboldened by an outpouring of international solidarity, these American indignados said they'd be there to greet the bankers when the stock market opened on Monday. It looks like, for now, the police don't think they can stop them. ABC News reports that "even though the demonstrators don't have a permit for the protest, [the New York police department says that] they have no plans to remove those protesters who seem determined to stay on the streets." Organisers on the ground say, "we're digging in for a long-term occupation".

You can watch what's going on live here.
Posted by Teamster Power at 4:14 PM