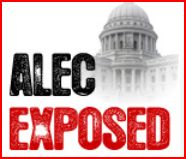 New Jersey's Gov. Gone Wild, Chris Christie, is touring three states in anticipation of a possible run for president. Or at least that's what the mainstream media is reporting. According to Bloomberg News,


New Jersey Governor Chris Christie, who is urging Republican presidential candidates to take a harder line on spending and debt, began a national round of speeches and fundraising today as party donors urge him to reconsider a White House run in 2012.

Christie, 49, has been getting calls from party leaders and executives since Texas Governor Rick Perry stumbled in a nationally televised debate on Sept. 22...

The Fired Up! Missouri blog posted this photo of the reception Christie got today in Missouri: 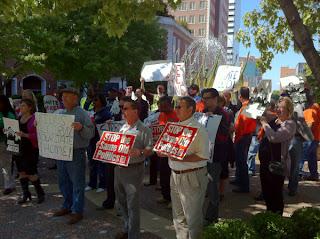 
It looks like some people in Missouri have also been paying attention to his actions in New Jersey.


Daniels has already dramatically introduced enough competition in education that some public schools are now advertising on billboards.


Basically, it is a group of corporate executives and state legislators who are in each other’s pockets, and draft “model legislation,” whose only purpose is to help the corporate bottom line. These prototypes of legislation serve as the bases of many state bills that are entered into state legislatures for enactment into law as if they were independently conceived ideas.

People all over the country are paying attention to corporate-funded governance, it seems.
Posted by Teamster Power at 3:59 PM