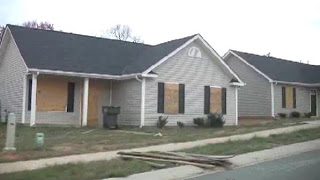 More bad news from the U.S. Census Bureau last week: Poverty rose in 88 of 100 metropolitan areas. Hardest hit were cities that lost manufacturing and those that experienced a housing boom-then-bust. Alan Berube at Brookings writes,


Over the first two years of the downturn, Sun Belt metro areas on the front lines of the housing market collapse—in Florida, the Intermountain West, and inland California—registered the largest increases in poverty rates. They were joined by a handful of metro areas in the nation’s manufacturing belt like Indianapolis and Cleveland. Several of these places continued to experience rising poverty from 2009 to 2010, but the most affected places included a broader set of metro areas in the Southeast like Columbia, Birmingham, and Nashville; in other parts of the West like Salt Lake City and Colorado Springs; and in previously better-off regions like Austin and Omaha.

The Atlantic notes the rapid rise of poverty in the suburbs during the aughts:


The 2010 data confirm that poor populations continued their decade-long shift toward suburban areas. From 2000 to 2010, the number of poor people in major-metro suburbs grew 53 percent (5.3 million people), compared to 23 percent in cities (2.4 million people). By 2010, suburbs were home to one-third of the nation’s poor population—outranking cities (27.5 percent), small metro areas (20.5 percent), and non-metropolitan communities (18.7 percent).

Another Brookings scholar, Scott Allard, writes that the suburbs are less able to take care of poor populations than cities:


In the wake of the Great Recession, demand is up significantly for the typical suburban provider, and almost three-quarters (73 percent) of suburban nonprofits are seeing more clients with no previous connection to safety net programs. Needs have changed as well, with nearly 80 percent of suburban nonprofits surveyed seeing families with food needs more often than one year prior, and nearly 60 percent reporting more frequent requests for help with mortgage or rent payments.

Almost half of suburban nonprofits surveyed (47 percent) reported a loss in a key rev­enue source last year, with more funding cuts anticipated in the year to come. Due in large part to this bleak fiscal situation, more than one in five suburban nonprofits has reduced services available since the start of the recession and one in seven has actively cut caseloads. Nearly 30 percent of nonprofits have laid off full-time and part-time staff as a result of lost program grants or to reduce operating costs.

This is the legacy of bankers' greed and job-killing trade deals.
Posted by Teamster Power at 3:15 PM