At least five protesters were arrested today on Wall Street during the fourth day of an occupation intended to inspire a Tahrir Square-like protest to "restore democracy to America." 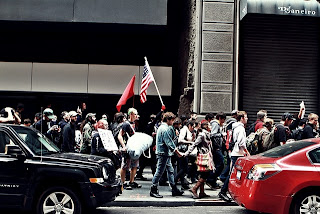 ThinkProgress reports Yahoo is censoring emails about the protest:

ThinkProgress has reviewed claims that Yahoo is censoring e-mails relating to the protest and found that after several attempts on multiple accounts, we too were prevented from sending messages about the “Occupy Wall Street” demonstrations.

Over the weekend, thousands gathered for a “Tahrir Square”-style protest of Wall Street’s domination of American politics...several YouTube users posted videos of themselves trying to email a message inviting their friends to visit the Occupy Wall St campaign website, only to be blocked repeatedly by Yahoo.

The photos are courtesy of Juan-Carlos Hernandez (we're hoping he doesn't mind -- you can see more at his blog.)

Egyptian food cart owners are donating leftovers to the protesters. Tweeters from Spain, France and Egypt are sending messages of support to the protesters occupying a park -- just renamed "Liberty Park" -- on Wall Street. New Yorkers are bringing them water after work. Some sample tweets:

@HauserGreg: #OccupyWallStreet needs more people! Don't give into police resistance yet, it's what they want! Keep on singing and marching!

@DemocrWatchdog: The only persons arrested in relation to the financial crisis are the activists behind #OccupyWallstreet.

The arrests were preceded by a morning march, described by Nathan Schneider for The Indypendent:


They marched around the plaza, chanting “Occupy Wall Street! / All Day! All Week!” and then set off heading south on Broadway...Upon arriving at Wall Street, they found that the blocks around the New York Stock Exchange, which had been barricaded completely throughout the weekend, now had open sidewalks. (The roadways themselves were still barricaded, allowing the police to move around easily.) After briefly massing at the entrance to the sidewalk, they proceeded down it, still chanting, and banging on the barricades, making a mighty noise. They were intermingled, inevitably, with those trying to get to work in that area and mainly clogged the way—which was the point. “We! Are! The 99 Percent!” they chanted....

For almost two hours the march continued, continually evading attempts by the police to pin them in or guide them out of the area by making sudden turns and course reversals. Just as the barricades on Broad Street were opened to let them out and keep them out, they turned around and headed back up toward the Stock Exchange and along Wall Street.....

Most bystanders and commuters in the midst of the march weren’t amused. (The goal wasn’t to amuse them.) “Shit” was something I heard a lot. A bitter dog-walker said to a security guard, “They say it’s their street”—Wall Street Is Our Street!—“but they don’t even pay taxes.” Along those lines, the “Get a job!” line was pretty common. So was ambivalence. “I hope the police protect the financial… bullshit.”