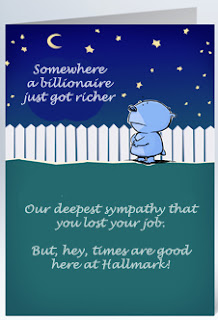 The millions of unemployed Americans looking for work may soon find unemployment sympathy cards in their mailboxes. The cards bring a bit of whimsy to the devastation caused by the job crisis, including quips like, “When life gives you a lemon, go ahead and make a martini with it.”

CBS quotes the owner of a Hallmark store in Dallas as saying “the cards are flying off the shelves.” The Texas unemployment rate reached 8.5 percent in August, its highest rate since the 1980s.

While unemployed Americans receiving these cards from friends and family would probably just prefer the cash, it remains to be seen how the cards will be delivered.

About 120,000 Postal Service workers are at risk of losing their jobs. Under a proposal by agency administrators and several Congressional members, thousands of post offices and mail processing facilities could close and Saturday mail service could cease to exist.

On Tuesday, Sept. 27, 435 rallies were held nationwide in support of USPS workers.

"Irony" is an unemployment sympathy card going undelivered because the postal carrier is unemployed.
Posted by Teamster Power at 1:51 PM