As usual, protesters waved signs and chanted as he passed by, then continued to chant as he spoke. Today those protesters were Teamsters from Local 651 in Lexington. (A big thank you to Local 651 President Michael Philbeck for sending these photos!)

The Lexington Herald-Leader brings us this report:

While about 70 protesters stood in the rain Thursday morning, chanting "Stop the War on Workers," Republican gubernatorial nominee David Williams stood with Wisconsin Gov. Scott Walker at a rally in Lexington. 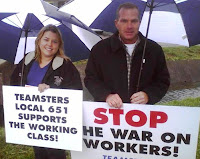 Walker, in his first year in office, has been the bane of unions for curbing collective bargaining for state worker unions in his budget, which was passed by the Republican-controlled Wisconsin legislature...

Walker was not fazed by the protesters outside the Fayette County Republican headquarters on Southland Drive whose loud chanting could be heard as Walker and Williams touted conservative values at the rally. (Note: We don't consider them "conservative" values. We consider them "anti-worker.")

Walker actually had the nerve to say the Teamsters were "protecting big government union bosses." He was obviously speaking from the focus-group-tested Tea Party playbook that tells political stooges what words to use. But really. Does anyone seriously think people stand out in the rain holding signs -- or storm the Wisconsin Statehouse -- to "protect" labor leaders? How exactly does that work?

Local 651 Secretary-Treasurer Gary Blake had an answer for Walker:


We will unite to protect our Kentucky workers and resist David Williams and any others who share Scott Walker's views on labor.

Right on, brother!
Posted by Teamster Power at 3:38 PM