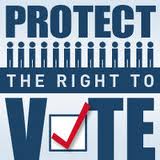 Great news from Ohio, where efforts by Teamsters and others to fight the state's new voter suppression law are succeeding.

Today,  opponents of the bill submitted enough signatures to the secretary of state to put the new law on hold. Reports the Cincinnati Enquirer,


Ohio Democratic Party chairman Chris Redfern told reporters earlier this week that the groups would hand in more than 300,000 signatures to Secretary of State Jon Husted, a Republican who supports the elections overhaul. Elections officials would have to verify the names to make sure they meet state requirements.

Opponents need about 231,000 valid signatures to get a referendum on the law before voters next year. If they are successful, the law would be in limbo until after the presidential election.

That's the earliest chance for voters to decide whether the law should be tossed out.

The ballot repeal push does have consequences for the Nov. 8 election, when voters will decide whether to get rid of the state's contentious new collective bargaining law.

Teamsters -- including Ohio's active Teamster retirees -- have been busy over the past few months collecting signatures to put the law on the November ballot.

Great work, everybody!
Posted by Teamster Power at 4:30 PM