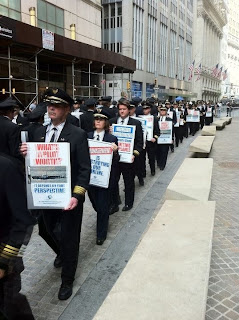 Occupy Wall Street protesters joined U.S. postal workers in a march this afternoon. Separately, more than 700 United and Continental pilots picketed on Wall Street to raise questions about the merger of the two carriers, according to the International Business Times. Oh, and Princeton professor Cornel West is there too.

So many workers (and non-workers) have so many grievances it's probably not surprising they should meet up.


@LukeSkywalker: Our #occupywallstreet peeps just met up with a big group of postal workers! What a party! We Are One.

@superbranch: Standing in #solidarity with USPS workers is a very, very good idea for #occupywallstreet

@coupmediagroup: #OccupyWallStreet makes it to Postal Workers Rally! "we dont want no bailout, we just want the mail out!" #solidarity = #winning!

Here's the IBT on the pilots:


More than 700 Continental and United Continental pilots took to Wall Street on Tuesday to protest slow contract negotiations and misinformation regarding merger integration. The demonstrating pilots marched together, queitely, in order and in full uniform, holding two signs.

"Merger Progress is More than Painting Airplanes," said one sign.

West will speak to the Wall Street occupiers at 7 pm tonight.
Posted by Teamster Power at 5:32 PM