Return of the supermarket checker 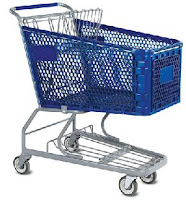 We're glad to see that self-serve lanes in supermarkets are starting to disappear. Many customers apparently  prefer to deal with actual skilled people rather than machines.


Grocery store jobs one of the few routes to middle class not requiring education beyond H.S. Heavily unionized. #coincidence

The Associated Press reports that supermarkets are getting rid of their do-it-yourself machines to improve customer service.

Supermarket chains started introducing self-serve lanes about 10 years ago, touting them as an easy way for shoppers to scan their own items' bar codes, pay, bag their bounty and head out on their way. Retailers also anticipated a labor savings, potentially reducing the number of cashier shifts as they encouraged shoppers to do it themselves.

The reality, though, was mixed. Some shoppers loved them and were quick converts, while other reactions ranged from disinterest to outright hatred , much of it shared on blogs or in Facebook groups.

An internal study by Big Y found delays in its self-service lines caused by customer confusion over coupons, payments and other problems; intentional and accidental theft, including misidentifying produce and baked goods as less-expensive varieties; and other problems that helped guide its decision to bag the self-serve lanes.


It didn't seem to me that the additional capital costs would really be offset by labor cost reductions. They still require at least one hovering employee to deal with problems and card people for alcohol purchases. In addition, people aren't very fast at using the machines so you need a higher number of machines/user to speed people through the line. We may not see "supermarket cashier" as a super high skilled position, but the fact remains that doing it well, as with most things, does in fact require skill. A good cashier is fast and accurate, checking people out more quickly and more efficiently. So I'm not totally surprised that they're pulling back a bit, though I'm sure the next scheme promising a reduction in personnel will be embraced as soon as it comes along...