Wall Street occupiers are preparing to march again, fortified with a delivery of care packages from around the world and a visit from Russell Simmons, founder of the hip hop label Def Jam. Simmons posted this message today:


I am asking the United States government to raise my taxes and not allow the Republicans to use this economic recession as an opportunity to strip the basic programs that protect our most vulnerable. 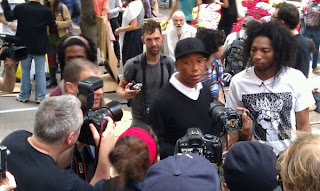 A photo gallery of the occupiers can be found here.

Kevin Gosztola at firedoglake reported on the march last night with postal workers:

...they went to go show solidarity with the postal workers union holding a rally to protest impending layoffs and cutbacks to the postal service. Loud cheers erupted when Occupy Wall Street marchers showed up to the rally. Someone with Occupy Wall Street was even given the opportunity to speak. The representative with the occupation said over a megaphone the occupiers wanted to come down and show support because America needs its post offices. The representative invited postal workers to come down to Liberty Park and share their grievances with the occupiers. That received another loud cheer. Then they chanted together, “What’s disgusting? Union busting!”

For those committed to criticism of Occupy Wall Street, this must have been disappointing because these “hippies” most definitely do not appear to be out-of-touch with Main Street.

The protest against inequality and corporate control of the government is spreading to 70 cities in the U.S. A list of the occupations can be found at http://www.occupytogether.org/.

There'll be an occupation of a JP Morgan Chase bank in Lexington, Ky., tomorrow, according to the Hillbilly Report. Occupy Chicago has encampments at the Federal Reserve, Millennium Park and Willis Tower, according to Business Insider. About 50 camp out during the day, with a dozen sleeping overnight. 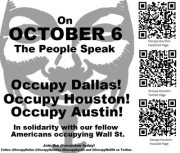 ...the people behind Occupy Boston showed a strong dose of media savvy and organisational skill on Monday night, as they drew a committed crowd of volunteers to their cause: to occupy a slice of the city. Local TV crews were in attendance at the evening mass planning meeting, and it had been flagged on the front pages of Boston's newspapers.

Finally, here's an astute observation from Emily Manuel at In These Times.


America’s political classes would do well to listen to the grievances of those involved with Occupy Wall Street, for they undoubtedly represent a set of anxieties shared by a great deal of the population. The corporate take-over of the American political process has not gone unnoticed, neither has the disparity between continued Wall Street profits and the cuts to the welfare state. As unemployment continues at high numbers, resentment surely stirs among those whose lives are slowly being drained at the expense of the corporate state.