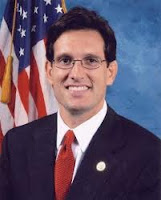 Eric Cantor, the baby with a nail gun House Majority Leader, is playing another game of chicken with the Senate, this time over disaster relief. Only it's disaster relief that's desperately needed by his own constituents.

Jim Rowley at Bloomberg News wrote a terrific story about the damage to Louisa County, Va., caused by recent disasters: the earthquake, Hurricane Irene and torrential rain. The epicenter of the Virginia earthquake was the Town of Mineral, squarely in Cantor's district.

Shock waves toppled chimneys and gravestones near the epicenter outside rural Mineral, Virginia, and shut down Dominion Resources Inc.’s North Anna nuclear power station 11 miles away. Louisa County officials estimate the Aug. 23 quake - - which rattled the Capitol and other buildings in Washington and sent tremors beyond New York City -- caused as much as $90 million in damage in the county, said Mineral Town Manager Willie Harper. That exceeds the $85 million non-capital county budget for 2011-2012.

The U.S. Senate has passed a $7 billion bill to fund the Federal Emergency Management Agency (FEMA), which aids disaster victims such as those in Louisa County. The House, under Cantor's leadership, is delaying a vote on half that amount. House Republicans want to attach the FEMA funding to a resolution that continues to fund the federal government beginning on Nov. 18. To complicate and delay matters, Cantor is insisting that funding for disaster relief be offset by budget cuts elsewhere. Note that Cantor doesn't demand offsets for tax cuts or wars.


Senate Majority Leader Harry Reid, D-Nev., and House Majority Leader Eric Cantor, R-Va., appear to be on a collision course that could once again threaten to shut down the federal government.

At issue is the amount of disaster relief funding Congress should enact to help hurricane, flood and tornado-ravaged communities.

Cantor publicly blames the Senate for holding things up -- though it's the House that hasn't passed a disaster relief bill. Meanwhile, back home,

Structural damage forced Louisa County school officials to close the county’s only high school and a nearby elementary school...The county is busing more than 550 students of the damaged Thomas Jefferson Elementary School to modular classrooms set up outside another school 10 miles away...

Cantor’s staff has been helpful in answering questions about the application procedure for federal assistance and how the county can qualify, said Robert Dube, the Louisa County administrator.

The delay is frustrating for people who don’t know “what they are going to do when winter sets in” because “they lost their only source of heat” from chimney damage, Dube said. “They don’t have the means to fix it.”