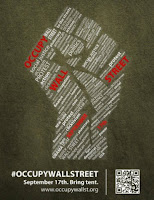 The Occupy Wall Street protesters are marching on Wall Street right now, chanting "We got sold out, Banks got bailed out," along with the ever-popular "Tell me what democracy looks like."

We understand there are 160 people camping in Zuccotti Park, with reinforcements on the way.

Earlier today, the protesters disrupted a Sotheby's art auction in solidarity with locked-out art handlers who belong to Teamsters Local 814. Here's an excerpt from their statement of solidarity:


#OCCUPYWALLSTREET supporters are appalled at the persistent attack on workers rights. We support the right of the workers to collectively bargain. Sotheby’s wants all new hires to have no collective bargaining rights, no health benefits and no job security. After locking out their unionized work force, Sotheby’s continues to operate using scabs and a non-union subcontractor. Sotheby’s Art Auctions epitomize the disconnect of the extremely wealthy from the rest of us.

Once again the UK Guardian publishes a stellar article about the Occupy Wall Street protest, now in Day 6.  Here's a snippet:


They blow trumpets, bang drums and chant slogans while holding placards that read “Free Market My Ass” and “Too Big Has Failed”. They go back and forth down Wall Street, behind barricades lined with police, and then return to the camp in Zuccotti Park.

They then spend the day holding workshops, informal concerts and various protest stunts (such as the nude demonstration). They welcome visitors and tourists and try to obey the demands made by the police.

Each day a “general assembly” is held where topics and events are discussed in a free-for-all of debate and discussion. “It is a leaderless situation,” said Thorin Caristo, 37, who nonetheless is part of a small core group of people who try to keep things organised.

The protest has attracted wide support and has a sophisticated social media operation. There is a live feed onto the internet and a huge presence on Twitter. Supporters around the world have even been sending in orders to a local pizza shop to keep the protesters fed. So much so, in fact, that some organisers have asked them to stop ordering pizza as they had more than they could eat. Now most help comes in the form of money or – most importantly – more people coming.

Last night Keith Olbermann took the mainstream media to task for failing to cover the event. (We all know how much media would be there if the Tea Party had staged the protest.)

And here are some favorite tweets:


@NYCSep17: #occupywallstreet overheard officer talkiing about how they should be marching with us. Rt

@grimwomyn: I refuse to believe corporations are people until TX executes one #occupywallstreet

And we love the tweet that disappeared saying (paraphrasing) "a well-dressed friend said, 'Don't they have jobs'...EXACTLY!!!
Posted by Teamster Power at 4:44 PM