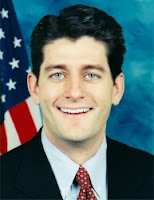 So trying to take away Medicare just wasn't enough for him.
Reuters reports,

Republican Representative Paul Ryan, an outspoken opponent of President Barack Obama's healthcare reform, proposed a plan on Tuesday that could effectively dismantle the way most Americans get health insurance by reducing incentives to join employer-sponsored plans.


Ryan said the government should replace the income tax exclusion for people who get employer-sponsored healthcare and replace it with a refundable tax credit that they could use to purchase coverage on their own. Some 170 million Americans are now covered through the workplace.

Ryan argued it would give consumers the needed incentive to demand better value out of their healthcare.

No, it wouldn't. It would force employers to drop their health plans and pit individuals against insurance companies.

We all know how that will end.

Why does Paul Ryan hate America?
Posted by Teamster Power at 4:50 PM