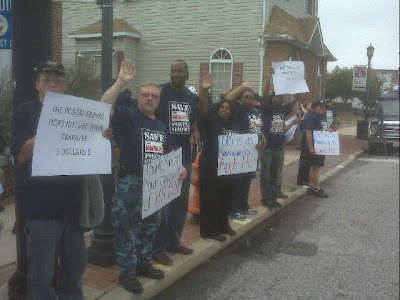 They're about to begin: rallies in every congressional district in the country to support Postal Service workers, prevent 120,000 layoffs and preserve America's middle class.

The rally pictured above began already in Catonsville, Md.

And in New York City, a loud, energetic march has gotten started.

Here's the AFL-CIO Now blog on what the rallies are all about:


Under the guise of a “budgetary crisis,” some in Congress are going after the USPS, proposing massive cuts and layoffs—including laying off 120,000 workers, closing thousands of post offices, eliminating Saturday mail service and closing mail processing facilities.

Congress created this mess and Congress can fix it.

The USPS economic crisis is the result of a provision of the Postal Accountability and Enhancement Act of 2006 that requires the Postal Service to pre-fund the health care benefits of future retirees—a burden no other government agency or private company bears.

From the Postal Service we learn:


On Tuesday, September 27, from 4 p.m. to 5:30 p.m. (local time), members of the four employee unions of the United States Postal Service—

• National Postal Mail Handlers Union
• National Rural Letter Carriers' Association
—will join forces with members of our communities to send a message to the nation and its Congress.