Another arrest on Day 7 of the Occupy Wall Street encampment as the stock market see-sawed throughout Friday. The UK Daily Mail reports,

Wall Street was heading for its worst week in three years today, with stocks falling for the fifth straight day and plunging to new year lows - before some recovered slightly by lunchtime.

The further falls this morning are despite finance ministers from the world's leading economies pledging to take whatever steps are necessary to calm the markets.

Truthout offers an excellent account of how the Occupy Wall Street protest got started. The story concludes with a report on yesterday's action:


On Thursday evening, a surprise march of hundreds mourning the execution of Troy Davis in Georgia set out for Liberty Plaza from Union Square, led by occupiers. Police made attempts to stop it with barricades and clubs and arrests, but they couldn't; and when the marchers arrived, the numbers in the plaza swelled. There were a lot of new faces and new kinds of faces. It paid off to quit the Internet, go to where people actually are and bring them back.

The tweetosphere tells us there were 1,000 protesters sleeping in Zuccotti Park last night, but we're skeptical. We're guessing the real number is in the low hundreds. Reinforcements are expected this weekend. Connecticut's Wesleyan students, for example, joined the protest last weekend and will return tomorrow. According to the Wesleyan Argus, students 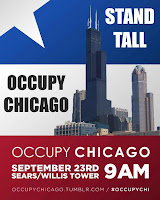 ...plan to return to Wall Street to participate again this weekend.

“I think weekend numbers will increase,” Batte said. “There will be Wesleyan students going. But the core group of a few hundred is still there. I don’t think it will fizzle out. They’re settled in, barring some sort of mass arrest.”

Meanwhile on campus, students who went to the demonstration on Sept. 17 have continued the protest on campus. Around 15 students are currently camped out in three tents on Foss Hill in what they are calling “Tent City.” The students residing in the Tent City hope to form a smaller campus version of the protest currently happening on Wall Street.

We hear the protest is spreading to Chicago starting today. Check out occupychi.org for more information. Here's a tweet about it:


@OccupyWallStNYC: It's spreading... @OccupyChicago: Shout it out! #OccupyWallStreet will be coming this Friday, to #OccupyChi

A handful of protesters began a mirror occupation in San Francisco's Financial District but its future is uncertain, according to a DailyKos post on Wednesday:


Justin...and his friends, and one kid from Canada, have been there since Saturday. I've been visiting them during the day for the past three days. They are a charming bunch of misfits that include at least one Ron Paul supporter. They are engaged and intelligent and eager to spread the message of anti-corporatism.

The weather is San Francisco has been lovely this week so camping outside has not been a hardship at all. They've only had brief run-ins with the police who have forced them to one side of the plaza.

We'll see how that goes. Meanwhile, here's a tweet from Kansas City:

Click here for a new website that keeps track of where else it's spreading. Click here or here to see how you can help.
Posted by Teamster Power at 4:14 PM