American corporations looted hundreds of billions of dollars from their pension funds and used their booty to reward top executives, according to a new book called "Retirement Heist: How Companies Plunder and Profit from the Nest Eggs of American Workers," by Ellen Schulz. 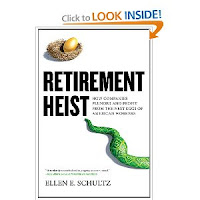 Schulz, a former Wall Street Journal reporter, writes that corporate pension funds had $250 billion in surplus assets a decade ago. Not anymore. That money's all been siphoned away. Pension Pulse tells us that Schulz explains how companies used these tactics:
NPR had the story today about the book, reporting:


Schultz cites this example of one well-known company whose pension fund has dropped significantly since the early 1990s. General Electric announced it was closing its pension plan to be more competitive. She says the company's financial filings show that GE has not put a cent into its pension plans since the mid-1980s. Over the years, GE, like most large companies, used assets in the plans to pay for other things.


And now that there is no more money left to plunder, corporations have decided to dump defined-benefit plans and move into less costly and more risky defined-contribution plans, shifting the retirement burden onto workers and leaving them at the mercy of this volatile wolf market.

Somehow, none of this is surprising.
Posted by Teamster Power at 10:24 AM