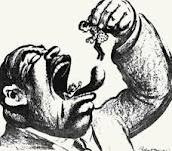 Twenty years after Jerry Brown ran for president on an anti-corruption platform, American cities and towns are finally acting on his words.


Our founders’ greatest fear was the danger posed by the merger of economic and political power. Indeed, when 200 years ago Jefferson started the Democratic Party, he proclaimed its purpose thus: “We must put it out of the power of the few to riot on the labors of the many.” The calamity which our forefathers feared most has, in our time, come to pass–an unholy alliance of private greed and corrupt politics. Our deteriorating economy, our collapsing political process, and our eroding system of common values, are the direct consequences of a few allowed to satisfy their appetites for greed and privilege. (Hat tip Joe Costello by way of Dylan Ratigan)


In the 2010 US Supreme Court case, Citizens United v. Federal Election Commission, the judges of the highest court in the land narrowly ruled that corporations were "people" with First Amendment free speech rights. The corollary of this judgment is that corporations, as "persons," have the right to contribute unlimited funds to political campaigns as an exercise of their free speech.

On the one-year anniversary of the landmark decision, a survey conducted by Hart Research found that only 22 percent of American voters were even familiar with the Citizens United case. However, the same study showed that nearly four in five (79 percent) of Americans were in favor of passing an amendment to overturn the decision and clarify that corporations should not have the same rights as people.

Cities and towns around the country are trying to stop the corporate corruption of our political process. Recently, the city council of Boulder, Colo., voted to put a referendum on the November ballot to amend the US Constitution to reflect that corporations are not people and money does not equal speech. So did the city council of Missoula, Mont.

In York reports that resolutions banning corporate personhood have passed in Madison and Dane County, Wisc., in Humboldt County, Calif., 10 towns in Pennsylvania and two in Maine. Resolutions have also been introduced in the states of Vermont and Minnesota.

Move to Amend is behind many of these efforts. The group posted a map of places around the country where resolutions passed to amend the Constitution to ban corporate personhood here.

There's a long, long way to go before the Constitution gets amended. A proposal has to be approved by Congress or the states, and then it has to be ratified by three-fourths of the states. But the point of the exercise is to build a movement to get corporate money out of politics. And that sure seems worth the effort.
Posted by Teamster Power at 4:30 PM