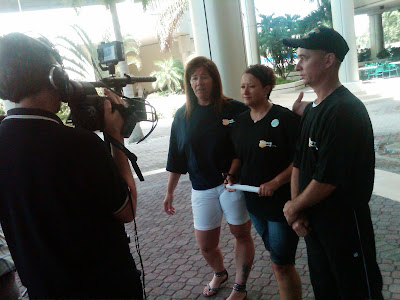 Here are photos of the Teamsters and Florida correctional officers rallying as three officers hand a copy of the Teamsters' ethics complaint to executives at the private prison company GEO Group. Florida Gov. Rick Scott wants to privatize prisons in 18 counties, potential throwing 4,000 corrections officers out of work. Teamsters complained that Scott received $30,000 for his inauguration party from two of the biggest prison privatizers in the country -- and one of the two is very likely to receive a $300 million annual contract. 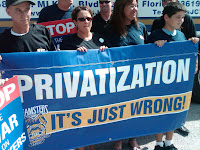 As Jess Bianco noted on the Teamster Facebook page,


GEO, CCA, and MTI all gave 10,000 each to Gov Kasich campaign fund here in Ohio. It's happening everywhere.

The video is coming soon!

Here's Sara Babineaux, one of the corrections officers who delivered the ethics complaint:


Privatization makes me angry doesn't benefit our families or the public.

Here they are delivering the complaint: