Who's really behind the IN right-to-work for less bill? 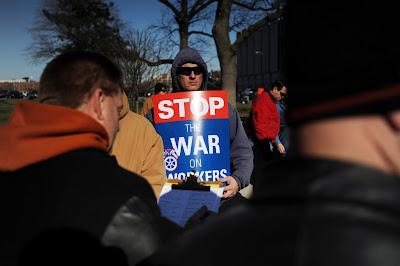 You won't be surprised to know it's the Benedict Arnold Koch brothers and their unpatriotic multinational corporate pals. None of whom are from Indiana.


This bill is no native born Hoosier idea. It tracks key provisions of "model" legislation secretly voted on by corporations and politicians on a task force of the American Legislative Exchange Counsel (ALEC).

Although ALEC calls itself the largest organization of state legislators, it is bankrolled by some of the biggest global corporations in the world, such as Koch Industries, Exxon Mobil, and other companies from outside of Indiana. About 99% of the funding for ALEC's operations come from corporations and sources other than legislative dues, which are $50 per year. ALEC legislators often introduce legislation, voted on behind closed doors by ALEC corporations and politicians, cleansed of any reference to the fact that the bills were pre-approved and pre-voted on by corporations. The current corporate co-chair for Indiana is the North Carolina-based Duke Energy Company, which is tasked by ALEC with raising money from corporations for "scholarships" for ALEC politicians to attend vacation conventions at fancy resorts with schmooze and booze events with corporate lobbyists.
Duke Energy came under fire last year in Indianda for trying to pass off onto customers hundreds of millions in over-budget costs for the Edwardsport Plant in Knox County. That coal gassification plant has gone so far over budget, to the tune of a billion dollars, that the state of Indiana has been looking into whether there was fraud or concealment. Duke has also been called out for paying no net taxes between 2008 and 2010 on over $5 billion in pre-tax profits, according to the Corporate Tax Dodgers Report of the Citizens for Tax Justice (which is uploaded below).

Duke's ALEC's state co-chair is Senator Jim Buck of Kokomo, who also sits on ALEC's Board of Directors, which approves "model" legislation in every area of the law. He is the co-chair of the ALEC Tax Task Force, which has previously opposed taxes on windfall profits of global energy companies and sought to eliminate combined reporting for corporations, thus making it easier for companies to use gimmicks to hide profits out of state.

State Rep. David Wolkins of Winona Lake is also an ALEC co-chair, along with Senator Buck and Duke Energy. He is also the co-chair of ALEC's Energy Task Force, and in 2011 ALEC named him a "State Legislator of the Year" for advancing ALEC's vision. (In some prior years, legislators receiving this designation also received cash "awards," although it is not certain if Wolkins did.)

Indiana is now playing a central role in ALEC's agenda. The Chairman of ALEC's Public Sector Board this year is Representative David Frizell of Indianapolis, who has also been a member of ALEC's Health Task Force. In all, at least 17 Indiana representatives and five state senators are members of ALEC Task Forces, along with an unknown number of other legislators who do not have these known leadership roles with ALEC corporate partners. Representative Richard McClain of Logansport, who introduced H.B. 1044, the latest version of "Right to Work" introduced in the state, is a also member of the ALEC Tax Task Force, along with Senator Buck.

Posted by Teamster Power at 9:54 AM