NFL players statement: 'No to RTW' 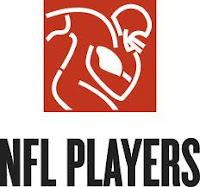 Indiana's Republican leadership is slam-bamming a right-to-work-for-less bill through the Legislature even as we blog. Part of their incentive: they want to get it done before their precious Super Bowl in Indianapolis.

Well, guess what. The players themselves -- you know, those unionized athletes without which you'd have no Super Bowl -- are against what the Republicans are trying to do. They just came out with a statement. Here's the whole thing:


WASHINGTON—As NFL players, we know our success on the field comes from working together as a team. We’re not just a team of football players—we’re also the fans at games and at home, the employees who work the concession stands and the kids who wear the jerseys of our favorite football heroes. NFL players know what it means to fight for workers’ rights, better pensions and health and safety in the workplace.

To win, we have to work together and look out for one another. Today, even as the city of Indianapolis is exemplifying that teamwork in preparing to host the Super Bowl, politicians are looking to destroy it trying to ram through so-called “right-to-work” legislation.

“Right-to-work” is a political ploy designed to destroy basic workers’ rights. It’s not about jobs or rights, and it’s the wrong priority for Indiana.

The facts are clear—according to a January 2012 Economic Policy Institute briefing report (“Working Hard to Make Indiana Look Bad”), “right-to-work” will lower wages for a worker in Indiana by $1,500 a year because it weakens the ability of working families to work together, and it will make it less likely that working people will get health care and pensions.

So-called “right-to-work” bills divide working families at a time when communities need to stand united. We need unity—not division. We urge legislators in Indiana to oppose “right-to-work” efforts, and focus instead on job creation.

As Indianapolis proudly prepares to host the Super Bowl it should be a time to shine in the national spotlight and highlight the hard-working families that make Indiana run instead of launching political attacks on their basic rights. It is important to keep in mind the plight of the average Indiana worker and not let them get lost in the ceremony and spectacle of such a special event. This Super Bowl should be about celebrating the best of what Indianapolis has to offer, not about legislation that hurts the people of Indiana.