Teamsters swarm into IN Statehouse 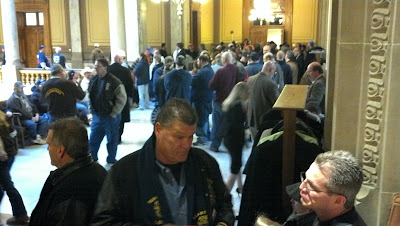 Teamsters are filling the corridors of the Indiana Statehouse after public pressure forced Gov. Mitch Daniels to rescind the crowd limits. Our brother Bob Warnock was among those denouncing the new policy, which was meant to discourage protests. He told WNDU,

During the 2011 session of the Indiana General Assembly, Warnock spent about six weeks at the statehouse protesting so-called Right to Work legislation. “I was there for six weeks, almost every day, there was no incidents that I ever saw or witnessed.”

The new rules come in the name of safety, from the Indiana State Police, the Indiana Fire Marshal and from the Indiana Department of Administration, although some believe it’s just a way to silence those who were so outspoken in 2011 as the Right to Work debate resumes.

“The taxpayers in the state, regardless of their position, pay the light bill, the heat bill, pay for that statehouse and now they’re being told they’re not going to be able to use it. We’re going to lock you out in the cold and conduct the government’s business,” Warnock said.

Above, Teamsters from Locals 710 and 135 await the arrival of many, many more union brothers and sisters. We'll keep you posted.
Posted by Teamster Power at 12:34 PM