We march in the big Welcome Home the Troops parade.

We learned about this on Joint Council 13's Facebook page. JC13 reported 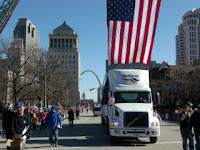 Teamsters from across Teamsters Joint Council 13 came out to support our brave men and women returning home. It was an honor for the Teamsters to be requested to march with Operation Homefront in the Welcome Home the Troops parade held in downtown St. Louis !

And by the way, union membership climbed 15.3 percent in Missouri last year!
Posted by Teamster Power at 2:17 PM