Teamsters descend on IN Statehouse

Teamsters packed the Indiana Statehouse today to fight right-to-work (for less) legislation, along with other union members and their families and friends. The interior halls of the building are full and, despite freezing temperatures, more protestors are coming out to show their support for working families and the Democrats who support them. 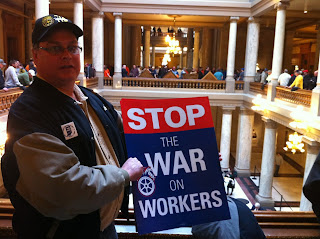 House Democrats have walked out of the House chamber this session, effectively denying Republicans quorum to conduct business. However, today they returned at high noon and are expected to debate proposals for a November referendum on right-to-work-for-less. The referendum would allow the state’s voters to decide the fate of the heinous bill.

Protestors inside the State House are chanting, “Whose House? Our House,” as they clap and cheer for House Democrats.
But it isn’t just government buildings where working Hoosiers are letting their voices be heard. Outraged union members, concerned citizens and working families have been circulating and signing petitions, phone calling, emailing and registering people to vote. They even protested in front of House Speaker Brian Bosma's house in Geist.
Posted by Teamster Power at 2:41 PM