Red-letter day in IN on RTW 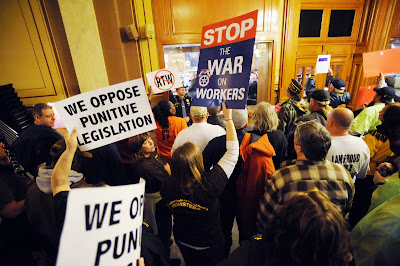 Teamsters from Northwest Indiana left for the Statehouse at 5:30 this morning for the crucial battle over right-to-work-for-less today. In fact, Teamsters from all over the state and beyond will be there to support Democrats who want to put the question on the ballot.

As the Associated Press reports from Indianapolis,


Indiana's House of Representatives are set to decide whether voters should make the call on contentious right-to-work legislation.

The House scheduled a vote Tuesday on the referendum proposal along with other amendments to the bill. Supporters of the proposal to ban unions from collecting mandatory representation fees from workers have struggled to push the measure through the House so far because of periodic boycotts by House Democrats.

Teamsters have been phone-banking like crazy, attending forums, sending tons of letters to the editor of local newspapers and contacting their elected officials, according to Bob Warnock III, principal officer of Local 364 in South Bend.

We'll keep you posted on what happens today.
Posted by Teamster Power at 10:02 AM