No holiday for Teamsters fighting RTW in IN 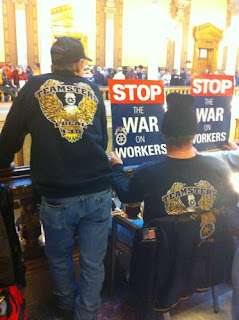 Teamsters, politicians, football players and faith leaders took no time off this weekend from the fight against RTW in Indiana.

In Logansport, for example, union members are passing out handbills today with Dr. Martin Luther King's picture on it and his quotation:


In our glorious fight for civil rights, we must guard against being fooled by false slogans such as ‘right to work. It is a law to rob us of our civil rights and job rights.

Forums to discuss right-to-work-for-less took place all over the state. WANE reports on Sunday's discussion in New Haven:


On Sunday around 75 people gathered in New Haven for another forum. Rep. Phil GiaQuinta (D-District 80) was there. Rep. Phyllis Pond (R-District 85) was invited but couldn't make it.

"I think once people find out what's in the bill and do the research and find out how it impacts them each individually by a wide margin they're against the bill," GiaQuinta said.

The Indy Star published a must-read letter to the editor from the NFL Players Association. It read, in part,


During the NFL lockout and the months leading up to it, NFL players learned lessons that most older American workers learned decades ago: namely, that all of the protections that employees currently have in the workplace resulted from the ability of workers to stand together as a team, protect their rights and demand change for the better. It is a lesson that many of us have not only forgotten but, worse yet, simply never learned.


Our leaders are faced with a stark choice between the pursuit of economic justice and equality for all or taking the path toward growing inequality and unchecked corporate greed.

Hoosiers are preparing for a religious program in the Statehouse tomorrow. The Stand Up For Hoosiers Facebook page reports


On Tuesday, January 17th from 9:30-10:30 there will be a Religious program at the Statehouse Chapel to learn about Right to Work for Less and to offer prayers to working people If you are interested in going please contact Becky Smith (317-372-8795) We are then asking you to stay and talk with your state representative and senator and let them know that RTW for less is not what the workers of Indiana need.