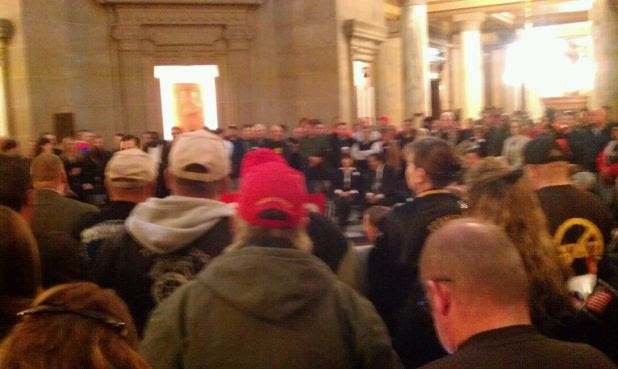 Chants of "Occupy the Superbowl" and "Labor's in the house" are ringing through the Indiana Statehouse now as a large crowd grows inside the building.

House Republicans denied anti-RTW Democrats meeting space, so they caucused in the Rotunda. Workers surrounded the Democrats in a huddle reminiscent of that will happen at Lucas Oil Stadium next month. (See photo above.)

@missionworker tells us the presdient of Interfaith Worker Justice opened the caucus with a prayer.

Teamsters from all corners of Indiana and beyond headed to the Statehouse early this morning to lobby against the right-to-work-for-less bill that the Republican leadership is trying to move like shit through a goose quickly.

House Speaker Brian Bosma, who led his own damn walkout in 2001, is threatening to fine Democrats $1,000 a day for walking out of the Legislature. He had tried a bait and switch that didn't work. Bosma promised Democrats they could try to amend the RTW bill to allow for a referendum, then got a legal opinion that such a referendum is unconstitutional. Charming.

Bosma's problem is that some of his Republican members support unions. From @inunion:

It will be another rock 'em, sock 'em day in Indianapolis.

If you can't be there today, 'Like' Local 716's "Against the Right to Work Law in Indiana" Facebook page.

And stay strong, brothers and sisters.
Posted by Teamster Power at 9:16 AM