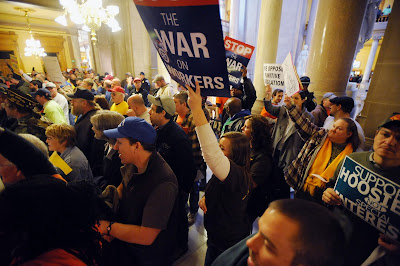 We just don't know what's going to happen next week in Indiana, where the state's Republican leadership is trying to ram a right-to-work-for-less bill through the Legislature like shit through a goose quickly. We believe next week will be pivotal.

Here are a few things we do know:
Chris Bowers at DailyKos writes that the Democrats may be able to defeat the steaming pile of dogshit legislation:


...Democrats and unions are within striking distance of stopping the bill.

This information is based on an anonymous source, so obviously take it with a grain of salt. Still, there is an intuitive logic backing it up. With multiple members of the Democratic caucus actually facing the possibility of losing their homes over this, at this point they would not be staying out of the chamber if the fight was hopeless.

Let's hope he's right. Here's something you can do: send an e-mail supporting the Indiana Democrats here. It'll just take a minute.
Posted by Teamster Power at 12:44 PM